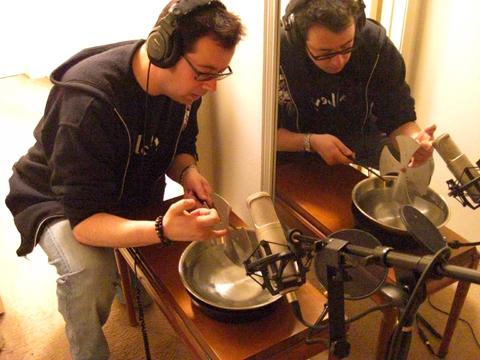 Greetings music fans.  I’m here with another installment of ‘session notes’.  These are posts about studio stuff I’ve been doing over the past year or so and highlights the drums and mics used, what kind of room I was recording in, general vibe, etc… everything that went into capturing the sounds and getting keeper takes.

This time out, I’m sharing information about a series of sessions I did with Uncle Daddy.  Tongue in cheek name aside, this is a very talented and eclectic band that includes two acoustic guitars, mandolin, violin, and cello… and yours truly behind the kit.  This unique instrumentation makes for some pretty wonderful music.  So, here’s the run down of some of the stuff I’ve done with them:

Studio – Moon Studios, Northridge, CA
Guy Moon has a GREAT studio space called Moon Music nestled in the sleepy suburb of Northridge, CA.  It has got some serious mojo going on too.  We have been able to tap into that mojo for a number of really special sessions that spanned most of 2010.

We approached all of these sessions (about 10-12 in all) with a similar headspace.  We found a formula that worked and ran with it.   As I mentioned, some of these songs would be destined for albums (in the case of Chelsea Moon and the Uncle Daddy Christmas album) while others would be mixed, mastered and put up on itunes, etc. individually for immediate consumption.  It’s an interesting way to work and the results so far have been pretty cool.

Let’s spend a bit of time talking about the rooms at Moon Music.  The main room has a lovely high ceiling (say 20 feet or so) and is probably about 30×30 (maybe slightly bigger).  The control room is just off of the main room and they are running Protools HD and have wonderful API, Millenium, and Grace mic-pres so we had a great selection of options for the drums.

I don’t have the advantage of sight in this situation, but after the first session the engineer and I came up with some good shorthand codes so I could get what I needed and vice versa.  So, sacrificing visual contact isn’t that big of a deal.

And speaking of engineers… all of this great gear, great vibe… it’s only as good as the guy behind the desk.  Gabe Moffat has this room locked down and he gets GREAT sounds.  Serious ears and a great demeanor makes for easy work.  Gabe’s got it all in spades.  He’s also wicked quick behind the desk.

But I know, you’re asking yourself ‘what about the gear, man?  What gear did you use?’  O-kay already! Guy’s son, Dusty is a drummer himself so I typically use one of his kits (or a combination of pieces) to make my ‘kit du jour’. Here’s the run down of what I was using for most of the sessions:

A note about the ‘room’ mic.  It should be called a ‘hallway’ mic.  We have it set up in the hallway about 4 feet up.  We crack the sound proof door about 2-4″ so we get some sound hitting the mic and the natural compression you get from a tube mic… well… it’s very ‘Levy Breaks’ vibe and I love it.  Particularly with that beefy 24″ Gretsch kick.

Sticks?  What else?  VATER!  I used their Recording model primarily.  A couple of times I picked up a pair of 5A’s (primarily if I wanted a different kind of sound on the cymbals – the Recording and 5A are similar in weight).  When the mood strikes I will also use their Wire Tap brush, the Monster Brush, and the T4 mallet.  I always have a stick bag full of Vater goodness.  For most of these sessions though, it’s been the Recordings.

The sessions here are typically pretty painless.  Gabe and Guy have the various rooms pretty well dialed in so sounds come up quickly with minimum fuss and muss.  Dinner is had al fresco in the back yard.  These sessions happened at night and we would typically do between 2-3 songs depending on how far along the arrangements were, and how things were gelling as we played through everything.  Night sessions are some of my favorites.  I think the general feel is very different than if you were to record at mid-day.  I just like the vibe more and feel the resulting sounds and performances are inspired.  As the sun fades, there’s something that happens.  Maybe there is something about most musicians being night owls.  Those souls that really ‘come alive’ as the sun dips below the horizon line.

As these tracks came together, it was pretty clear that what was going ‘to tape’ was pretty special.  I have had the chance the hear all of the songs we’ve recorded and I must say that Gabe has wonderfully put everything in it’s own sound world.  I don’t feel like anything is really crowding anything else and the lyrics are right on top (right where they should be).  I’ve been very happy with the results we’ve gotten at Moon Music so far and look forward to many more sessions in the future.

Check out www.gouncledaddy.com for more about the recordings, great slide shows, and the various comings and goings of this fun crew of stringed mayhem makers.  For all things Chelsea Moon… check out Chelsea Moon’s myspace music page. Thanks for reading and keep listening!