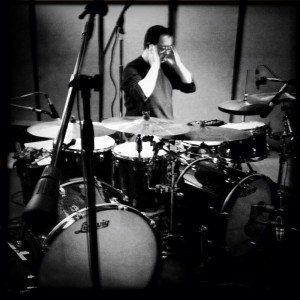 “Christopher is my new favorite drummer.  Simple as that.  The first time I met him on an album project I was completely blown away; ‘Where had this guy been hiding?’  He’s humble, powerful, and has a wealth of tone options in his gear arsenal. His time is rock solid.  He is a GREAT drummer with a high degree of skill and confidence and is still very ‘produceable’.  He makes my productions better.”
—Michael ‘Smidi’ Smith, Venice Studio (producer, writer, and engineer for One Republic, Ke$ha, Jordyn Sparks, Tyrone Wells, Raining Jane, Mozella, Moi Navarro)

“Christopher consistently delivers what I need no matter what the project.  His hard work, creative ideas, consummate playing ‘in the pocket’ and vast knowledge of styles and sounds continually make him a pleasure to work with.”
—Guy Moon (composer, producer, studio boss: Moon People Music)

“I’ve had the pleasure of recording with Christopher many times at my studio.  With every project he brings his expert drumming skills, creativity, musical ears and unrivaled professionalism.  When Christopher is on the gig, I know it’s going to be great.”
—Jon Mattox (owner, Bright Orange Studios)

“Christopher is the kind of musician every producer wishes they had on every record.  Not only is he a world class drummer with impeccable time, feel, tone, and taste; but his overall musicality, creativity, and positive energy makes him an invaluable asset in any session.”
—Mike Butler (producer, guitarist: Billy Bob Thorton and the Box Masters, Nena Anderson, Freddy and Francine, Lynda Kay)

“Christopher is a hell of a drummer.  He’s got all the usual stuff down pat (time, feel, etc.), comes in with tempos & arrangements solid, and for sessions he makes himself invaluable by his even temper and his ability to quickly change gears and fully execute new ideas as if he’d been playing the song that way for years.  It’s always a pleasure to work with him.”
—Aaron Tap (producer, guitarist: Matt Nathanson, Jesse Macht, Paula Kelley)

“… This would be a good time to mention my great friend Christopher.  He’s a drummer that shows up at 7:30 for a 9 o’clock gig.  He plays at a reasonable volume.  His kit always sounds better than great.  He sings.  I am known for knowing ‘a million songs.’  Christopher knows 1.5 million.  He’s the best ‘wing it’ drummer in the history of wing it gigs.  He’s a great guy with an incredible feel for making every song sound right, even if we’re playing it for the first time.  I’ve done over ‘250 hundred’ gigs with him and it’s always been great.  I suggest we clone him.”
—Page 60 of “The Amazing Adventures of a Marginally Successful Musician” written by Bill Cinque, bassist for Neil Diamond, Denny Laine, Peter Asher, The Hollies, Michael Lloyd, and countless others that would, no doubt, take up this entire space.