Session Notes – Doing that voodoo that we do 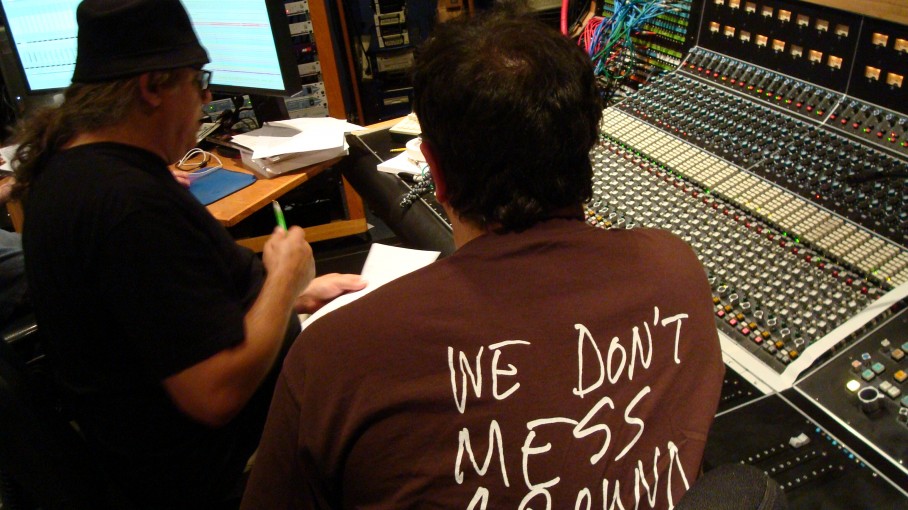 This is the first of a new series – Session Notes.  This will be a place for me to geek out with you all about different sessions I’ve been on and talk about the gear used, general philosophies about the sounds we went for, and how we got them.  I’m excited to share this information and it’s just a lot of fun to geek out.  So, enjoy.

This was a pretty easy session as we were familiar with most of the songs already.  We had been playing them at a residency we had for almost a year.  When you get to work out all of the kinks on stage and refine your parts over time, going into the studio is a lot easier.  It’s kind of the opposite way to do things in the traditional sense.  The typical cycle is record, release, tour… repeat.

Sonically, we were really going for a nice warm, live, open sound.  We close mic’d everything on the kit and then had room mics set up roughly 8-12 feet away and up around 6-8 feet  We wound up putting these in a fair bit to keep the air in the sound.  Room mics are something I’ve really been getting into a lot lately.  Hedley Grange I guess.  At any rate, it’s nice to have the option of bringing more air and space in your sound.

Gear wise, it’s always hard to limit oneself because when you’ve got the gear you want to bring it and use it.  You know:  have a lot of options.  Often though you wind up using what you naturally are gravitating to at that particular point in time anyway.  Basically you overpack and then wind up wearing the same pair of jeans for the whole trip.  Anyway, here’s the run down of the gear and the mics:

Snare Drums
As always, I tried to go for a nice variety of tones.  The list included:

These 5 have been my go to drums of late and, as always, they didn’t let me down.

Cymbals
(of course) were all Istanbul Agop.  I’ve been with them now for about 4 years and I couldn’t be happier.  The sounds are rich, full, and present.  When I play them, it satisfies me on so many levels.  They are the best.  The cymbal list included:

Sticks?  Vater, of course!  I’ve been with Vater now for about 5 years officially.  I can’t say enough good things about them.  They feel great, they are consistent, and they are wonderfully musical.  I used their Recording model primarily.  A couple of times I picked up a pair of 5A’s (primarily if I wanted a different kind of sound on the cymbals – the Recording and 5A are similar in weight).  I also used their Wire Tap brush, the Monster Brush, and the T4 mallet.  I had a stick bag full of Vater goodness.

Set up was done the night before and was easy breezy.  We placed most of the mics as well so when we got into the studio the next morning, it was just a question of running some cables and plugging in.  The live room at Stagg Street is a beautiful wood lined space.  It was probably about 20-25 feet wide and we were working with around 15-20 foot ceilings.  So, the drums had a lot of room to open up and breathe.  It was lovely!  Like I said, we were going for a nice warm, open sound.  We didn’t do a lot of funny stuff and only relied on some compression as we tracked and that’s about it.  The result are some really wonderful sounds.  It only took about a half an hour or so to get the sounds where we wanted them… maybe an hour (we tweaked a few things along the way).  Once we got sounds, it was up to me to deliver some solid performances!

We tracked 8 tunes on the first day and finished up with 3 tunes on the second.  We were on such a roll that first day that we just kept going for it.  Our focus was to get keeper for drums and bass and, with a few exceptions, that happened within the first few takes.  Generally, the first few takes are the ones where you are still taking some chances and things are feeling musical and everyone is locked.  Once you go beyond that, the concern is that people will start to go on autopilot and not pay attention so things get sloppy and unusable.  This is why pre-production is so important.  It’s all about finding a balance between energy and having it locked up tight.  Jason Chesney (bass) and I really had our parts down and the groove was there.  I mean, it’s REALLY easy to groove with Jason.

The fact that we knocked out the tracks so quickly not only gets you excited… but also keeps you grounded and humble – knowing that you knocked out 11 tracks in 2 days and it’s some of the best sounding stuff you’ve ever done.  It makes you appreciate that you can’t do this alone.  There’s a team of people that all have to work together to make it happen.

We got to hear mixes as they went through their various iterations.  This is always an interesting time because you are remember what you heard in the studio and then are getting your head wrapped around the new sounds that are being carved out as the mix phase proceeds.  I can say that the sounds are some of the best that our producer/MD (Christian Nesmith) has captured in our almost 10 years of working together.

The album came out in late summer and our cd release show was at the Echoplex in Silver Lake.  A large and rather loud room that was a challenge to get sounding good, but the band made it happen and now things are already in progress for the NEXT album.  Circe is frighteningly prolific and we are already talking about different ways to approach what will be my 6th album with her (and her 7th overall).

Check out music and general goings on with Circe at www.circelink.com.  Thanks for reading and keep listening!