Another round of Session Notes 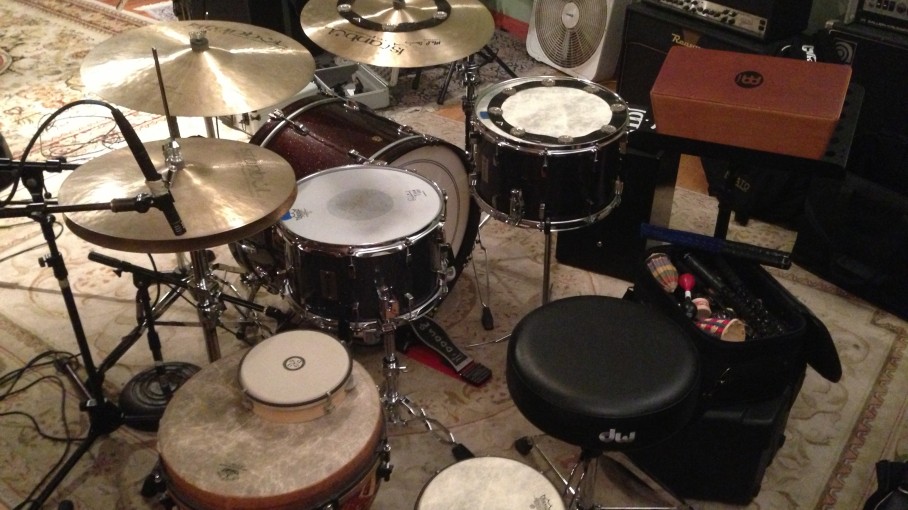 This session was an E.P. so we only did 6 songs.  Unfortunately, I can’t recall when we recorded it.  It  was sometime in 2010.

We had done pre-production a week before so we had the parts locked and it was a great time tracking.  I should mention my esteemed colleague holding down the low end for this one.  Ted Russell Kamp is a major dude and brought the thump to the proceedings.  He’s a wonderfully writer and performer in his own right (and left, for that matter).  So, I didn’t have to worry about THAT at all!  We were lucky enough to track at Phantom Vox in Hollywood.  Seth Horan was behind the board and I must say that between knowing Ted was in front of me on bass and Seth was at the controls I didn’t worry about anything.  Not a thing.  I didn’t even worry about a snare string breaking.

Sonically, we were really going for a nice warm, live, open sound.  We close mic’d everything on the kit and then also had room mics happening which wound up getting used often.  It’s always hard to limit yourself because you want to have a lot of options.  But then, you wind up using what you naturally are gravitating to at that particular point in time anyway.  Here’s the run down of the gear and the mics:

Snare drums
I tried to go for a nice variety of tones.  The list included:

A rare day when I only bring two snare drums and know I’ll be covered.  In the Phantom Vox main room, I know that 8×14 will be killer.  If I want more bite, there’s nothing better than a Black Beauty.

I had Vater sticks in my hand for the proceedings (well, for all proceedings…!).  I usually have Recording and 5A models in my bag as they are pretty comparable weight wise.  I wound up using the 5A’s mostly as I wanted a slightly different sound coming off the drums and cymbals – one that I could get more easily with a nice acorn type of tip instead of the barrel tip on the Recording model stick.

Phantom Vox has a couple of lovely kits to choose from (one of Toss Panos’s DW kits, and a couple of old Slingerland kits – a black one and a white one) so I  went with the black sparkle one (I’d say from the early 60’s).  A great woody tone that mics love.  The live room at Phantom Vox is full of vibe, soul, energy, and gear.  It was probably about 20-25 feet wide and we were working with around 15-20 foot ceilings.  So, the drums had a lot of room to open up and breathe.  It was lovely!  It only took about a half an hour or so to get the sounds where we wanted them… maybe an hour (we tweaked a few things along the way).  Once we got sounds, it was up to me to deliver some solid performances!

We were getting things within a couple of takes.  Sometimes we would do a couple of additional punches or full takes  just to have some different options if Bart or Seth wanted.  It is important to point out that, while you should always go for solid keeper takes and play through the whole song…the simple fact of modern recording is that you are often going to get assembled.  Final takes are often stitched together from various takes.  Again, this isn’t always the case but it is something you need to be aware of.  I used to get bummed about it but your job is to show up and really nail the take.  If you do that and the artist or producer wants to hear different things than you played off the floor, thank goodness it’s still YOUR parts that they are pulling from!  You can’t think that you’re going to get chopped up… you just can’t worry about it.  I’ve talked to a lot of guys about this and I’ve heard from far better than me that you have to be prepared for it.

I am happy to say that, as we listened back to each take in the main room, I don’t think any of us really felt like anything needed to get dropped in or tightened up.  That’s when preparation and opportunity come together to create a wonderful thing.  It’s good for the ego, but also leaves everyone in good spirits – because you’re on the same page.  When that happens, the music doesn’t suffer: it just blooms.

I hope you enjoyed this latest installment!  Thanks for all of your comments and thoughts.  I appreciate it.  Keep ’em coming!